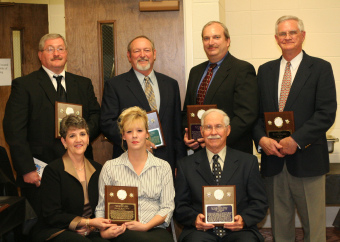 J.D. Arnold
J.D. Arnold graduated from Ragland High School in 1947 where he played guard on the varsity basketball team. After graduation, he joined the United States Navy where he served aboard the USS Saipan from 1948-1952. He attended the Alabama School of Trades and later Gadsden Junior College (now Gadsden State Community College). He was the “voice” of the Ragland Purple Devil Football Team for thirty-three years. He announced the varsity football games from 1958-1991. The 1988 football season saw the Purple Devils make their first trip to the playoffs in school history. He announced the school’s first ever football playoff game in which they lost to T.W. Martin. The Purple Devils returned to the playoffs the next season and Arnold announced their first playoff win in school history along with the second round game that followed. He also announced the first game played at George Eden field and later Joan Ford Stadium, the current home of the Purple Devil’s Football Team. He was a coach in the Dixie Youth Baseball League from 1965-1973. His teams won the league championship five times during those years. He was a member of the Ragland High School Athletic Booster Club from 1958-1991 and served as president from 1964-1966 and 1974-1976. He was also a member of the Ragland Parks and Recreation Board from 1970-1976.

Rev. Jim Bain
Jim Bain played football at Pell City High School from 1949-1952. He played college football at Mississippi State from 1953-57. His coaching career started in 1958 at Calhoun City High School in Mississippi where he won two conference championships. He also coached basketball at Calhoun City High. He received a degree from the New Orleans Baptist Theological Seminary. Bain was a pastor of four different churches in Mississippi from 1957-1981. Now a retired pastor, Bain is a member of the Fellowship of Christian Athletes and served on the staff of the National FCA.

Gary “Mount” Montgomery
Gary “Mount” Montgomery played football during the 1968-1969 season under Coach Raymond Farmer. He was an offensive and defensive tackler. He was Honorable Mention All-State Player in 1968 and made the All-State Team as an offensive lineman in 1969. He was the punter for the 1968-1969 teams averaging over 42 yards per kick. He was also a blocker.

Ralph H. Riker
Ralph H. Riker was born October 17th in Alfordsville, Indiana. He graduated from high school in 1945. He later moved to Alabama and attended Jacksonville State University where he received a B.S. Degree in Secondary Education in 1952. He was principal, teacher , and a coach at Cropwell School. Later in his career, he was named principal of Coal City School where he also coached. Then he moved to Moody where he taught and coached as well. His last move was to Springville High School where he taught and coached until he retired. Riker died in March of 2004 at the age of 77. 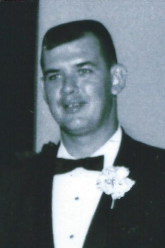 Howard “Butch” Ware
Howard “Butch” Ware graduated from St. Clair County High School in 1959 where he played basketball and baseball. During his senior season, he played basketball under Coach Coy Smith and averaged 24 points per game. He was named All-County and All-State three consecutive years. He was also named to the Sixth District All Tournament Team three straight years. He was named St. Clair County’s MVP in 1958 and 1959 and was selected to the North All Star Team in 1959. Ware also played baseball during high school and played for the American Legion Post 107. In later years, he played on various church and volunteer leagues throughout St. Clair, Jefferson, Blount, and Shelby counties. He was an outstanding pitcher, first baseman, and left fielder. Scouts with the Cincinnati Reds were ready to sign him as a pitcher, but he chose a basketball scholarship offered by Auburn University. Late, a knee injury cut his athletic career short. He was a member of the Alabama Peace Officers Association and held a local office position in the U.S. Steel Workers of America. He was also a member of Liberty Cumberland Presbyterian Church in Odenville. 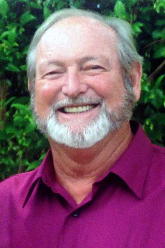