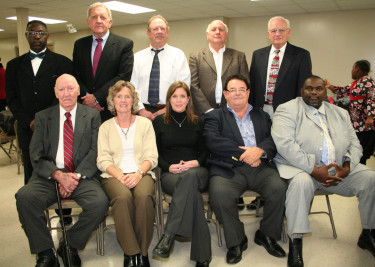 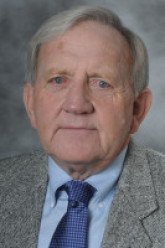 Ronald D. “Wally” Burnham is a 1959 graduate of Pell City High School. In 1963, he received his Master’s from Samford University. He was All State lineman at West Alabama from 1956-59. He coached at Memphis State from 1971-78, Florida State from 1985-93, and won the National Championship in 1993. He coached at South Carolina from 1994-1998 and was defensive head coach at Arizona in the USFL. He was the Assistant Coach at the University of South Florida from 2000 to 2008. He was the Defensive Coordinator/Linebackers at Iowa State from 2009-2015. In 2016, he joined Arkansas as an defensive analyst. Wally coached for 9 years with Bobby Bowden at Florida State and 5 years as an assistant head coach. In all, Wally has over 40 years of coaching experience which includes 35+ years at the college or pro level. Wally is a native of Pell City. He and his wife Barbara have three children.

Charles E. Byers is a 1970 graduate of Ragland High School. He graduated from Gadsden State Vocational School in 1981. Charles played point guard from 1967-1970 and was All Area every year. and All State his senior year. He was also MVP his senior year. Charles was the first African American to play basketball for Ragland High School. He is a member of the Second Chance Community Development Corporation where he serves on the advisory board. Charles is a Deacon at the Morning Star Missionary Baptist Church in Ragland, AL.

Julius Cook is a graduate of Ashville High School. He attended Gadsden State Community College. In high school, Julius played guard, tackle, and center in 1973-1974 and won All County team. In the early 80’s, he was the establishing President of the Ashville Youth Association. He was an umpire with the St. Clair County Amateur Softball Association (ASA) in 1978 and Vice President of the St. Clair County City ASA in 1980. In 1982, Julius became a member of the Etowah County AHSAA (Amatuer High School Athletic Association). From 1986-1988, he was a member of the AHA in softball where he participated in one National Tournament and five State Tournaments. Julius was head coach for the Ashville High School Girls Softball Team in 1993. He was assistant coach for the Ashville Junior High Girls Basketball Team from 1994-1995. He was the coach for the church league basketball team in 1999. Julius is pastor of Poplar Springs Church of Our Lord Jesus Christ (PSCOOLJC) where he is also the founder of the PSCOOLJC Builders for Christ. He served as Evangelist for the State of Alabama in the year 2000.

Luther Gartrell is a 1967 graduate of Georgia Military Academy. He graduated from the University of North Carolina Chapel Hill in 1971. He earned his doctorate of Juris Prudence at the Birmingham School of Law in 1976. In 1964, he won 3rd place in the Greater Atlanta Championship Wrestling. In 1965 and 1966, he won 3rd and 2nd place in the Fulton County Championship Wrestling. In 1967, he won 1st place at the Woodard Open Atlanta Area and received the MVP award among wrestlers. He also won 2nd place in the Georgia State Championship of Wrestling. In high school, he had 72 wins and 12 losses. He was captain of the wrestling team. In 1968, he finished 12th place at the NCAA Championship at Penn State. In 1971, he was voted most valuable wrestler and team captain by his teammates. He was also elected student athlete representative on the University of NC Chapel Hill faculty Athletic Council. He received 9 athletic letters at Georgia Military Academy, Woodward Academy for Wrestling, cross country, and track. He received 3 athletic letters from the University of North Carolina Chapel Hill.

Susan Bowman Graham is a 1977 graduate of Pell City High School. Susan earned her BS Degree in Physical Education in 1981 and her Master’s in Physical Education in 1991, both with honors from Jacksonville State University. She is currently pursuing her Master’s in School Counseling. Her projected graduation date is summer 2009. During 1983-1996, Susan was the varsity basketball coach at Ragland. They were county champs and top 8 in the state several times. She was coach of the year 3 times and won every season except two. From 1997-1999, she participated in League Ball with the Pell City Parks and Recreation just for fun. From 2000-2004, she was the Jr. High basketball coach at Duran. Susan has been the Coosa Valley Elementary School Jump Rope for Heart Team Coach since 2000 and the Coosa Valley Elementary Team Coach since 2005. She serves as advocate for the American Heart Association and American Cancer Society. She is a member of Delta Kappa Gamma Educational Sorority, The American Counseling Association and ASAHPERD (State Association of Health, Physical Education, Recreation and Dance). Susan is a member of First Baptist Church in Pell City.

Elmer E. Moree graduated from Shawnee Mount High School in Missouri. Elmer is a graduate of Howard College (Samford). He received his Master’s from the University of Alabama. Elmer coached at St. Clair County High School from 1950-58.

Bill Roberts is a 1959 graduate of Ashville High School and was class salutatorian. He graduated from the University of Alabama in 1963. While playing football for Ashville High School, Bill was a starter for 4 years. He played one year as fullback and 3 years as quarterback. As a senior, he played quarterback during the division 3A championship. In addition to that, he was captain of the team and received the MVP award. In 1958, Ashville has a baseball team for one year. Bill was a starter and the team won the St. Clair County Championship. Bill also was a 3 year starter on the basketball team. earning two All County honors and two MVP awards. Bill averaged 22 points per game during his senior year. Bill was named Who’s Who among high school students. He was president of the student council, named Mr. Ashville High School, Vice President of the Beta Club, Treasurer of the Senior Class, and was on the Annual Staff. He is a member of the Phi Mu Epsilon, Eta Kappa Nu, Tau Beta Pi, and Theta Tau Fraternities.

Tommy Thompson is a 1970 graduate of Ashville High School that received a scholarship to play football at a major university. He graduated from Memphis State University. Tommy played football and gained over 1400 yards in his senior year. There was an article in the Birmingham News about Tommy and the all state football team. Tommy was also a great track athlete winning the 400 yard dash. The track team was also state champions. 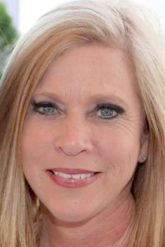 Kim Harbuck Wiley is a 1984 graduate of Huffman High School. She graduated from Jacksonville State University in 1989. During 1990-2003, she coached softball at Moody High School with a record of 227-87 in which 37 of her players received scholarships. Her team participated in six state tournaments finishing in 2nd and 3rd Place. They were the first 4A team in the state to go to fast pitch. Kim also coached volleyball and basketball, as well as serving as the cheerleading and dance team sponsor.