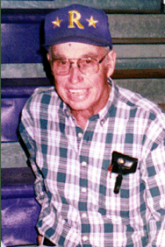 Phil Champion
Phil Champion moved to Ragland in 1946 at the age of 27. Once he made the move to Ragland, he never left. He worked at National Cement in Ragland until he retired in 1981 at the age of 62.
He always loved sports and played baseball for several years. In 1948, George Eden became a teacher and coach at Ragland High. Champion and Eden were cousins so Phil worked with George organizing the very first football team in Ragland. From the time he arrived in Ragland in 1948 until his death in March, 2000, Champion never missed a ball game Ragland played - baseball, football or basketball, home or away.
In 1999, Champion was voted Ragland’s Number 1 Fan and given a lifetime pass to all home games. Just before he passed away and while in the hospital, the students at Ragland High School placed a chair and big sign where he usually sat that read “Phil’s Place.”  He attended his last Ragland baseball game March 16, 2000, three days before his death. Alan Bean hit a grand slam and the team signed the baseball and placed it in Phil’s casket.
Champion coached girl’s softball in the 1980’s. He decided to quit coaching because he was not going to see all of the Ragland games but Jimmy Campbell talked him into helping him coach girl’s softball for 13 more years. The current softball field is named Campbell/Champion Field in honor of Jimmy Campbell and Phil Champion. 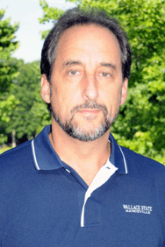 Lavaughn Butts
Lavaughn Butts graduated from Springville High School in 1980 where he excelled in basketball and track. He was named MVP of the St. Clair County Basketball Tournament in 1978 and 1980.In 1980, he helped lead the Tiger basketball team to an undefeated regular season and finished 26-1, losing in the state championship game. He was named to the All-State Tournament Team, and was an honorable mention All-State player. As a senior, Butts won the county track & field events in the 330-meter intermediate hurdles, 110-meter high hurdles, discus, high jump and 440-meter relay. He finished 6th in the state in discus and 4th in the state in the 330-meter intermediate hurdles. He earned a scholarship to play basketball at Wallace State Community College in Hanceville for two years.
Currently, Butts teaches Respiratory Care at Wallace State. He is a member of Redan Baptist Church. He is president of Parkside Middle School Booster Club and vice-president of the PTA. He coaches youth basketball and holds basketball camps for the community. He also worked with the Chamber of Commerce as an ambassador. 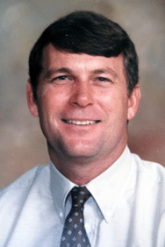 Randy Day
Randy Day graduated from Ragland High School in 1965. He played football and basketball. After graduating, Day attended Gadsden State for two years and then transferred to Jacksonville State University where he majored in Physical Education and minored in Biology.
His coaching and teaching career started at Moody Jr. High School in 1971. He won one jr. high basketball county title. When Moody became a high school in 1977-78, Day was the first head football and head basketball coach for Moody High School. All total, he spent 25 years teaching and coaching at Moody. His varsity boy’s basketball team won three county championships in the 1980’s.
The last seven years at Moody High school, he served as the school’s assistant principal. From there, he joined the staff at the St. Clair County School System working at the Central Office. For 13 years, Day was the Facilities Coordinator until he retired in 2007.
He and his wife Susan, have been married 27 years. They have one son, Daniel. They are members of Trussville First United Methodist Church. 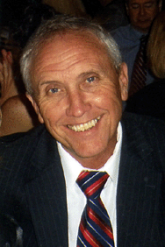 Jerry Ellard
Jerry Ellard graduated from Ragland High School in 1966. He played basketball while in high school and won various All-County and All-State awards. He lettered in basketball and in football. He signed a scholarship to play on the very first basketball team at Jeff State Community College in 1967. He later transferred to Jacksonville State University where he earned a B.S. Degree in Education in 1970. He later earned a Master’s Degree in Education and his AA in Administration in 1975.
From 1970 to 1978, he was the assistant football coach and head jr. high basketball coach at Ohatchee High School. From 1979 to 1983, Ellard was the assistant principal at Ohatchee before becoming principal in 1984. He retired from Ohatchee High School in 1992.
In 1993, he became a developer in commercial real estate and presently operates Ellard Development. He and his wife, Brenda, have been married 40 years. They have two children and three grandchildren. 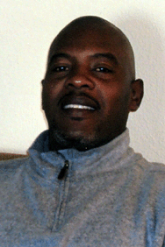 Johnny Bothwell
Johnny Bothwell graduated from Ashville High School in 1987. He played football, basketball and baseball while in high school. He played football two years and was named All-County First Team on defense and All-County Offensive MVP. He also played baseball two years but his favorite sport was basketball. Bothwell was named the MVP for the Jr. High County Tournament, Varsity County Tournament and Area Tournament. He holds the record for most points scored in a game (49) and averaged 26 points and 13 rebounds per game during his career at Ashville. He received an offer to play football at JSU but did not go.
He is a member of the Will and Della Bothwell College Fund and a member of Greater Grace Church in Gadsden. He played ASA softball for 12 years and coached youth basketball for 6 years.
He and his wife, Darlene, have been married 18 years. They have 3 children and 4 grandchildren. 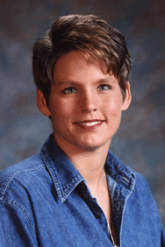 Lisa Golden Reaves
Reaves is a 1986 graduate of Pell City High School where she played basketball and volleyball. She made All-County and All-Area in both sports in 1986 and was named the MVP of her volleyball team her senior season. She did not play college ball because she blew out her knee during her senior year one week before the area basketball tournament and had to have a total knee reconstruction at the age of 18.
She received her B.S. in Education from JSU in 1991 and did her internship at Ragland High School. She was a substitute teacher at Ragland in 1991 and later that year was hired at Walter Wellborn High School. She had teaching and coaching stints at Ragland and Pell City High and has been at Sylacauga High School since 2002.
Reaves played women’s league and travel softball since the age of 12. She has played ball for several coaches who are now members of the St. Clair County Sports Hall of Fame including Tim Carroll, Jimmy Campbell, Phil Champion and her dad, the late Bobby Golden.
She and her husband, Todd, have been married 22 years. They have one son, Micah, who played baseball at Bevill State, Ole miss and is currently playing for West Alabama. They are members of Mignon Baptist Church, where her husband serves as pastor, a position he has held the past 11 years. 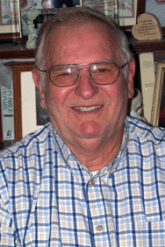 Louis Wise
Louis Wise is a 1957 graduate of Ashville High School. He became a charter member of the A Club at Ashville High in 1954. He played football and baseball while at Ashville High School and said he was better at football than baseball. He was named the Most Valuable Player in football at Ashville in 1956. He received scholarship offers to play football from Tennessee-Chattanooga and the University of Florida but was unable to attend.
From 1976 to 1981, Wise coached football and baseball in the Leeds Metro League. He has been a member of Bethany Baptist Church since 1952. He and his wife, Nadine have been married 42 years. They have four children and 12 grandchildren.